The British government has come under heavy criticism from its main opposition for failing to seek the UN rights body’s approval to refer Sri Lanka to the International Criminal Court (ICC).

Forty-seven member states of the UN Human Rights Council will be voting on a draft resolution aimed at promoting reconciliation and accountability in Sri Lanka at its 46th session due to wind up on March 23rd.

In a strongly worded letter to Nigel Adams, Minister of State for Asia, the Labour Party has slammed the resolution drafted by the core group of six nations led by the UK as “too vague and insufficiently robust, in terms of both its content and its tone”.

“It fails to reflect the extent of the devastating impact of the human rights abuses that have been perpetrated in Sri Lanka, and it also falls far short of what is required in terms of tangible action,” says ” Shadow Minister for Asia and the Pacific, Stephen Kinnock.

Echoing the disappointment of war-affected Tamils in Sri Lanka and abroad, the shadow minister has highlighted UK’s failure to refer Sri Lanka to the ICC.

“It fails to recommend that this matter should be referred to the International Criminal Court. We fully acknowledge that two of the Security Council’s permanent members would likely veto such a referral were it to be tabled, but this is not an acceptable argument against trying. The UK government’s approach to the UN Security Council should not be determined simply by the veto-wielding intentions of two of its permanent members.”

The Labour’s Shadow Foreign Minister has questioned the UK government’s inaction in this regard when it has a Global Human Rights sanctions regime (the so-called Magnitsky sanctions), which impose asset freezes and travel bans on those who are guilty of gross human rights violations.

“It is very difficult to understand why not a single senior Sri Lankan government minister, official or military officer has been designated under this regime,” says Stephen Kinnock MP.

“This is a test of the moral authority and consistency, which you claim underpins the government’s Global Britain’ strategy. The UK government owes it to the victims and survivors of the atrocities that have taken place in Sri Lanka to ensure that it rises to the occasion and shows the moral courage and leadership that is so urgently needed,” he concludes.

The letter in full below: 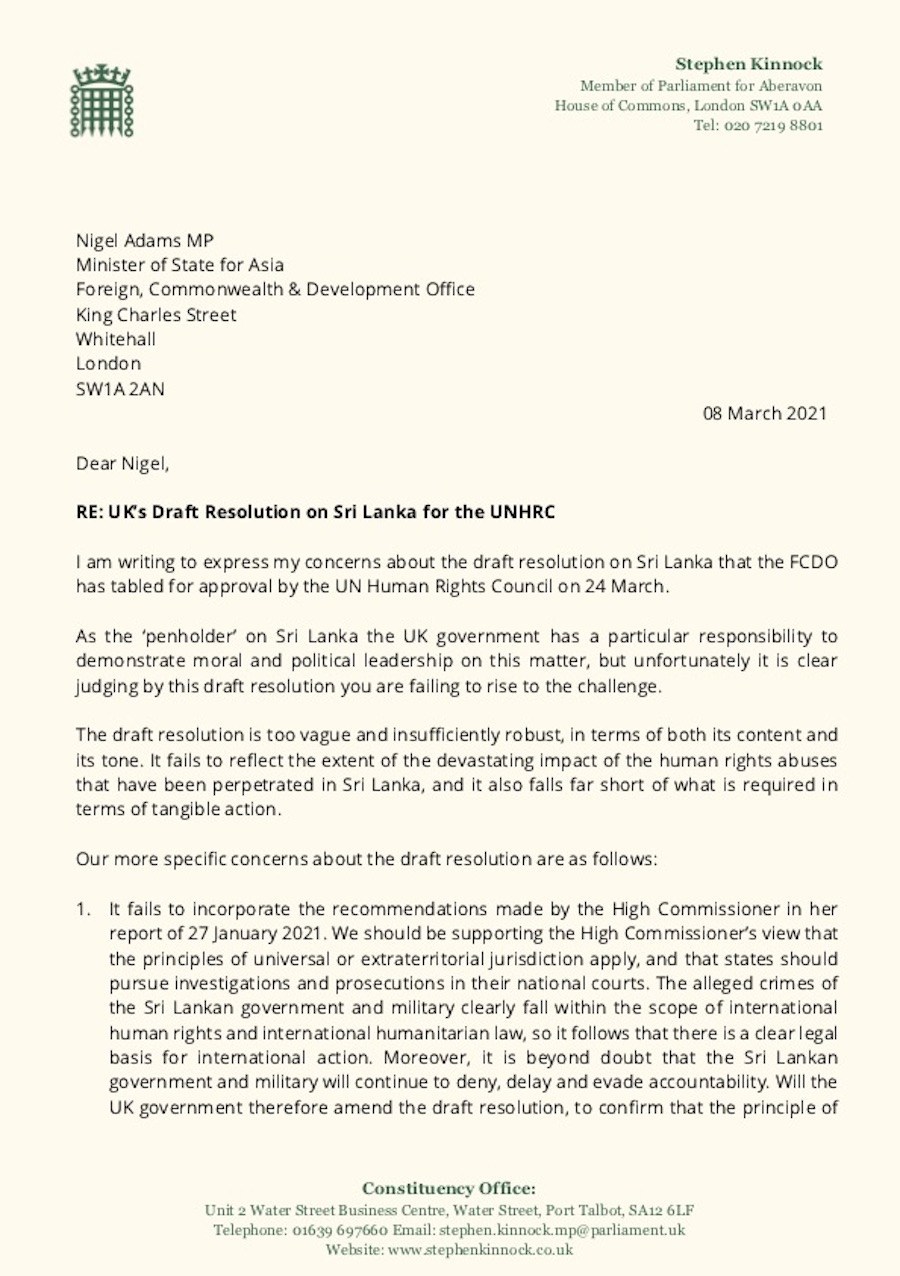 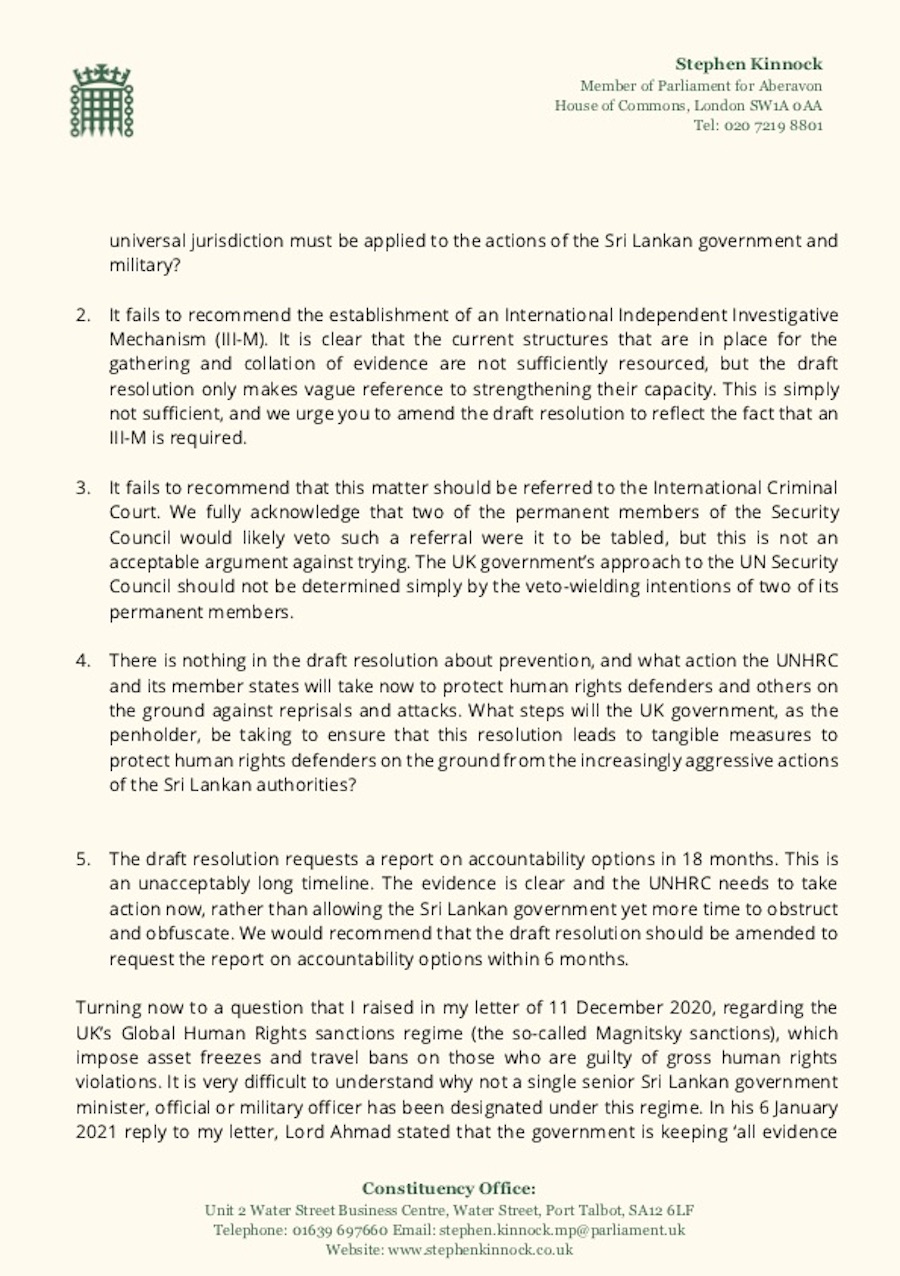 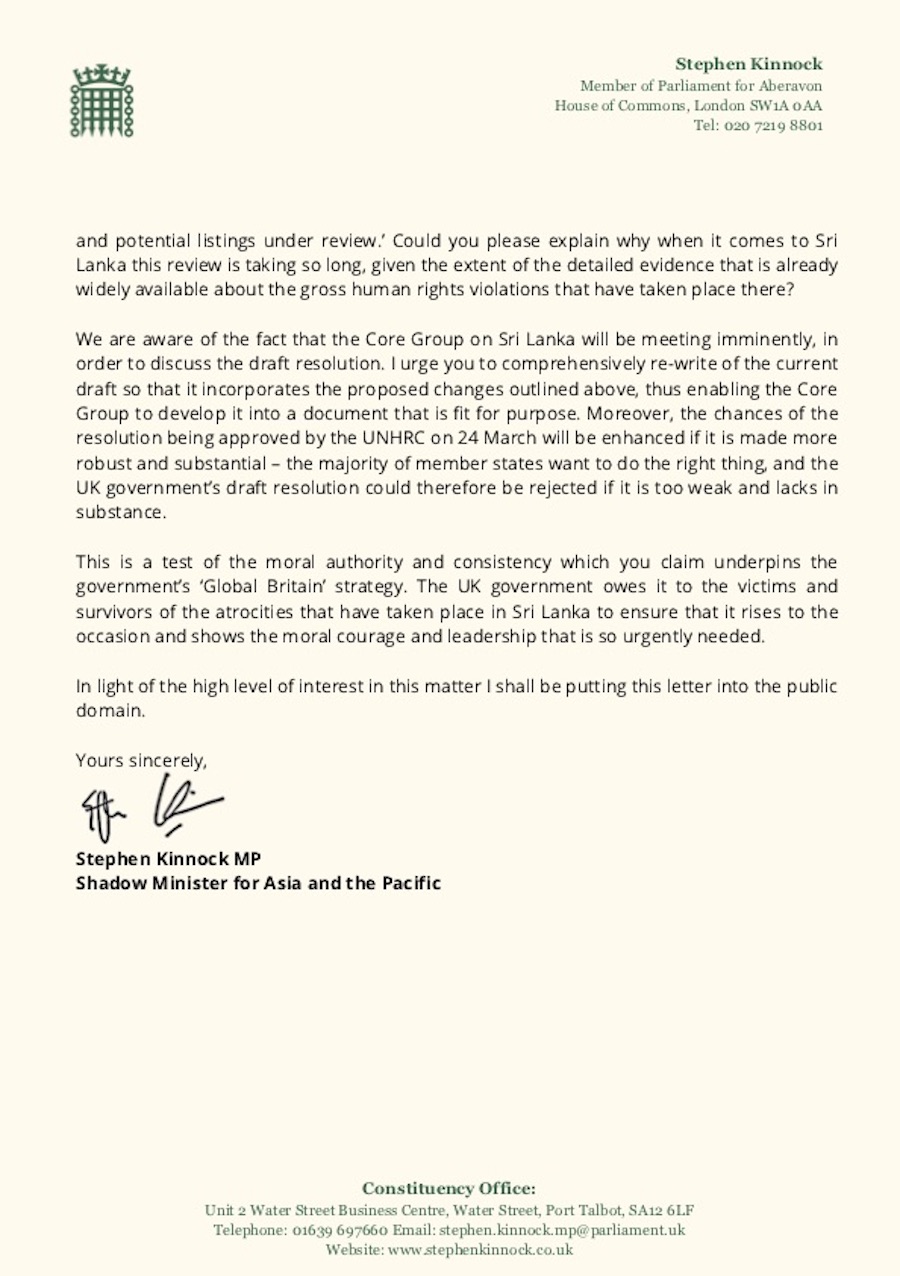