Sri Lanka’s problems are an alarm call for  emerging markets.
Rising rates and lower growth could lead to a wave of sovereign defaults. 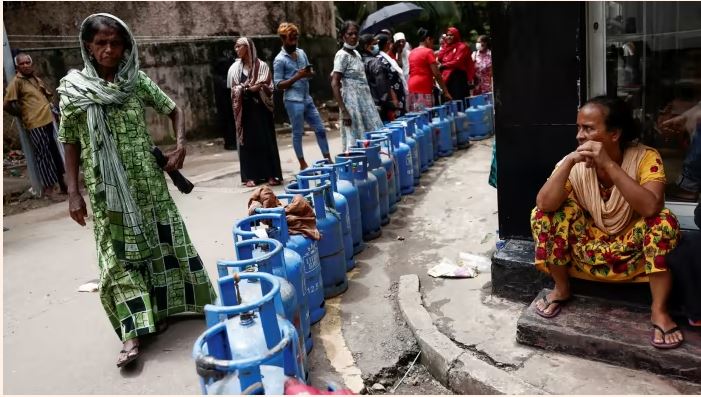 People wait to buy gas tanks in Colombo. With interest rates rising, investors can no longer risk as much in emerging markets, while states cannot afford to borrow © Dinuka Liyanawatte/Reuters

The brutal end of Sri Lanka’s civil war in 2009 was followed by a repressive calm. But there was still an economic peace dividend. Hapless government, however, made a cautionary example of the Asian nation. Last month, it defaulted on its debt. A nation that held $7.9bn in reserves in 2019 now needs help from allies to pay for deliveries.

There is much to Sri Lanka’s travails that is singular. In 2019, a new government tried to build popular support with a cut to income tax and value added tax. According to the IMF’s estimates, Sri Lanka’s gross debt will have risen from 91 per cent of annual output in 2018 to 119 per cent in 2021.

But a portion of the damage of the past few years was not unique to Sri Lanka. As a tourism hub, it was particularly vulnerable to the coronavirus pandemic. The disease, though, damaged balance sheets around the world. The Institute of International Finance estimates that, for a panel of 32 emerging markets (not including Sri Lanka), total debt — public and private — is up by 20 percentage points, to 248 per cent of gross domestic product.

This extra debt is a worry: during the crisis, poorer countries were helped by ultra-low interest rates in richer economies. That created a flow of cheap money that they could surf. As inflation has taken off in the developed world, however, so interest rates are now rising in response. Investors can no longer risk as much in emerging markets. States cannot afford to borrow.

It is not only higher rates doing the damage. Lower expected growth and new fiscal problems driven by the war in Ukraine are also a worry. The food and fuel price surge is causing havoc. According to the UN, key foods are 19 per cent more expensive than they were in December. So states must step in to help their people.

It is possible that such pressures will lead to a series of defaults. As during some previous international crises, the IMF may find itself trying to extinguish fires on many fronts at once. There remain problems, too, with how the world deals with defaulting states; for one thing, there is no functional code for helping countries to restructure debts.

The treatment of debt-distressed nations is still largely built on the assumption that the main creditors of a struggling nation will be a few rich countries and the institutions they dominate. According to the IMF, as recently as 2006, 86 per cent of poorer nations’ external debt was owed to a group of richer states — known as the Paris Club — and to multilateral organisations.

Today, that figure is just 58 per cent. By contrast, private bondholders and China have between them gone from holding 5 per cent of poorer nations’ debt in 2006 to 29 per cent of the total. China has also proved to be needlessly secretive in its dealings, so sovereign debt is more opaque than it was, as well as more fractured.

A “common framework”, introduced by the G20 and Paris Club, was intended to help resolve this problem by drawing together creditors with distressed debtors to make restructuring easier. But it has stalled. The three cases where it has been requested — Zambia, Chad and Ethiopia — are stuck.

Without an effective process to draw lenders together and assign losses, China’s influence will grow: its prominence as a lender means its strategy for handling defaults may dominate in contrast to previous crises.

China is indeed a large creditor to Sri Lanka. If the coming months and years do, as feared, produce a string of sovereign defaults, the extent of the resulting pain and mess will depend on Beijing’s willingness to share losses, rather than exploit its debtors. That makes Sri Lanka an important test case for the rest of the developing world.