A RESEARCH AND STUDY

Young Muslims feel their transition into the labour market is hampered by insufficient careers advice, lack of access to informal networks and discrimination in the recruitment

Many of these issues were worse for women. Muslim women felt that wearing the headscarf at work was an additional visual marker of difference that was perceived and experienced as leading to further discrimination.

Young Muslims feel a real challenge in maintaining their identity while seeking to succeed in Britain. They felt worried about being different and unsure about whether getting on was compatible with their identity as Muslims. Some responded by asserting their Muslim identity, although in some cases this constrained the career choices they made. Others felt there was a pressure to hide theirMuslim identity and so avoid the issue that way higher Education

Young Muslims have a relatively high level of participation in higher education, but their choices tended to be more constrained than those of some other ethnic groups. The Muslims interviewed in this research complained of inequitable access to high status universities as a result of geographical provision, discrimination at the point of entry, or self-limiting choices reflecting fears of being in

These factors mean that young Muslims are more likely to drop out early or to gain fewer ‘good degrees’ (1st or 2:1) than their non-Muslim peer

Young Muslims feel their transition into the labour market is hampered by insufficient careers advice, lack of access to informal networks and discrimination in the recruitment process:

Traditional3Workplace interactions and challenges
Being in a minority in the workplace often means constantly being aware and working hard to be accepted and fit in. Everyday workplace interactions can be a challenge, for example dealing with colleagues’ or customers’ lack of knowledge or understanding of Islam – often reported as resulting in feeling ‘othered’, different, separate or feared – as well as experiencing or feeling discrimination more directly

For Muslim women, wearing the headscarf at work presented further dilemmas, as this was an additional visual marker of difference that was perceived and experienced as leading to further discrimination.

The Social Mobility Challenges Faced by Young Muslims
Not all Muslims reported discrimination and disadvantage. Some participants also identified ways of using their identity to their advantage in the workplace:

Quote
“I’ve been to some super-white areas and, if anything, I feel like it’s helped me quite a lot to be the token brown person. It’s not caused me any issues. If there’s any sort of thing… like discrimination, it kind of works in myway. I work in technology, being a woman, it’s really, really easy. You pretty much get every interview you go to. (High Wycombe FG: female)Self-employment”

Given the range of challenges most Muslims reported in seeking and progressing in employment, some of those in our research had sought self-employment as an empowering response to these difficulties, offering new opportunities and safer choices that enabled them to feel more positive. For others, however, it was imposed on them due to problems in the workplace:

Quote
“Eventually I found a job and I left it because of how crude and rude people in the environment were. And I couldn’t find a job basically after being made redundant. I couldn’t understand why… Even though I can be quite hard work, there was something about me based on what I’d done, that I was employable. And that’s when I decided just to go it alone, essentially, and take a risk. I thought the risk of not doing it was higher than the risk of continually… I just found it demoralising. It knocked my confidence massively and I’m a fairly confident sort of person… If you want to have any hope of doing it, you need to sort of go it alone. (Oxford FG2: female)”

The levels of sell-employment amongst some BME groups is of particular concern since those who are self-employed earn on average 60% of the median annual rate of an employee per year whilst 45% of those self-employed aged 25 or over are paid below the National Living Wage (TUC, 2017).
Conclusions: Employment and the Workplace

The Social Mobility Challenges Faced by Young Muslimsalso paid less than their non-Muslim peers. This has both direct and indirectimplications for their social mobility.

Muslims are under-represented in the ‘top professions’ (higher and lower managerial and professional occupations) compared with other religious/non-religious groups, with only 16% of British Muslims holding professional or managerial jobs compared to a national average of 30%; in addition, the gender gap within the Muslim community is also larger than for any other religious group (ONS, 2015, cited in Reynolds and Birdwell, 2015).

While there was evidence from  participants that determination and persistence in gaining employment was reaping some benefits, many also reported difficulties in making progress as their experience and skills increased but without the commensurate recognition and reward:

They send me people, white people, any colour, I train them. I told them I’m not there for training people because I’m not getting that money for training, you know, so I’m staying there the same level…they prefer another person and colour to do their things, they’re happier you know, but I trained them. (Leeds FG: male)

“Three years into the role, I kept being promised I would progress and I’d be promoted. And it never happened. I remained on the same salary. But there was no feedback to tell me… actually I need to be doing this in order for that to happen. It was just ‘no, everything is great’, but nothing ever happened. It was a lot of sort of broken promises. (Oxford FG 2: female)

In some cases, these struggles can lead to ‘giving up’, or just surviving at work rather than progressing or aspiring:

No, everyone knows, you know, everyone knows about it [lack of promotion] so what to do? Because I’m sticking there to have money to pay my rent, not get out and go and find another job and go to Job Seeker, you know, so anything, just to survive, you know. That’s it, clock in, clock out. (Leeds FG: male).

Moreover the young Muslims in this study stated that they routinely experience or are aware of others who experience discrimination or racism on an everyday basis, and at all points in the process of applying for, gaining, sustaining and being successful in the workplace. Persistent experiences of this had deterred entry to some types of employment and progression, as there was a perception and fear that workplaces will treat them differently. Negative discrimination is expected, even if qualifications and abilities are equalYoung Muslims in the U.K. are “less likely to succeed in the labour market than any other faith group”, a report by a government commission has warned.

“Young Muslims living in the U.K. face an enormous social mobility challenge and are being held back from reaching their full potential at every stage of their lives.”

The report uncovers some “significant barriers to improved social mobility from school through university and into the workplace” as “Islamophobia, discrimination and racism” are reported by many of the young Muslims.

Participants in the research conducted by Sheffield Hallam University found quote “a strong sense of work ethic, high resilience and a desire to succeed in school and beyond.

“But many felt they must work ‘ten times as hard’ as non-Muslims just to get the same opportunities due to cultural differences and various forms of discrimination.”

According to data quoted in the document only one-in-five (19.8 percent) of Muslims in England and Wales are in full-time work.

This compares to one-in-three of the overall population aged between 16-74 years.

Researches said Muslim women in the U.K. are three times more likely to be economically inactive and only six percent of Muslims are in “higher managerial, administrative and professional occupations” compared to 10 percent of the overall population.

“Moreover, nearly half of the Muslim population (46 percent) live in the 10 percent of the most deprived local authority districts,” the report added.

“This has implications for access to resources, school attainment, progression to higher education and the availability of jobs, including those at postgraduate or managerial levels,” it said.

“Muslims are excluded, discriminated against, or failed, at all stages of their transition from education to employment.”

“This report paints a disturbing picture of the challenges they face to making greater social progress.

“Young Muslims themselves identify cultural barriers in their communities and discrimination in the education system and labour market as some of the principal obstacles that stand in their way.”

There are around 3 million Muslims living in the U.K.

Islamophobia and discrimination have seen a dramatic spike in the country in the wake of Manchester and London terror attacks earlier this year.

Some of the views mentioned are not necessarily  of WFSLM.

This is a general Research and  study, to be aware of current status of Young Muslims in UK 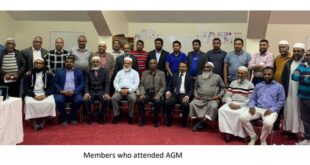 Letter from Ed Davey MP 11.03.21 (1) Example fallback content: This browser does not support …